Created in 2008 at the same time as the eponymous show, STEREOPTIK brings together Romain Bermond and Jean-Baptiste Maillet, both visual artists and musicians. Based on a score they build and write together, every one of their shows is built under the eyes of its audience, live. Theatre of shadows, of objects and puppets, silent films, unplugged or electronic concerts, fairy tales and cartoons are so many fields and genres whose boundaries STEREOPTIK likes to play with. At the heart of the many forms of art that appear on the stage is one principle: to show the audience the technical process that eads to the apparition of characters, of scenes, of a story. The audience is free to let themselves be carried away by the images and stories projected onto the screen, or to see in detail what leads to the movement of the cartoon on the screen, how ink creates a silhouette on a transparent background, what instrument is used to bring it to life. Visual, musical, and without text, STEREOPTIK’s creations arouse curiosity and wonder in audiences of all ages and all nationalities. 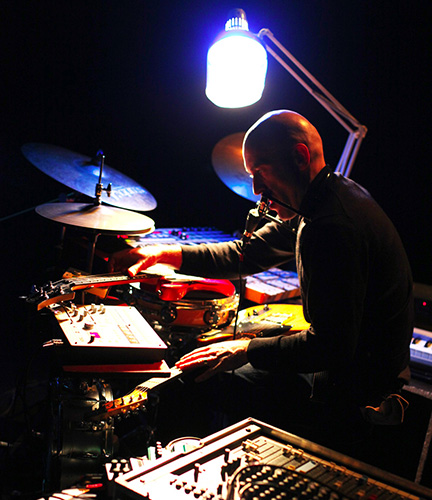 Jean-Baptiste Maillet began his musical studies at the age of seven in conservatories in Chatillon and Yerres, and in the regional conservatory in Saint-Maur-des-Fossés, where he studied composition and percussion, as well as piano. He was also a student at the American School of Modern Music in Paris for four years, where he diversified his techniques to include arranging, and discovered jazz, quintet writing, brass, and big band. His eclecticism was apparent from the very start of his career, with projects in chanson française, brass band, electro, in addition to circus and film music. He has shared the stage with internationally renowned musicians such as Clyde Wright (singer from the Golden Gate Quartet), David Walters, Cheptel Aleïkoum, Les Yeux Noirs, Jur (cofounder of the Cridacompany), and Florent Vintrigner from La Rue Kétanou. 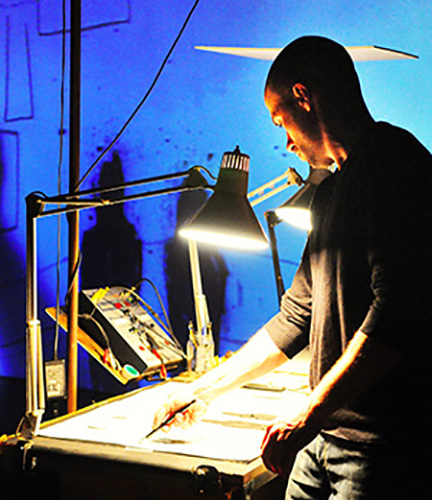 Romain Bermond’s passion for the visual arts bloomed in childhood. He took a perspective drawing class at a young age, which led him to specialize in visual arts already as a high school student in Paris. There he met two masters, Isabelle Labey and Fabien Jomaron, who guided him in his studies. He then went on to earn his bachelor’s in fine arts from the Visual Arts Faculty in Paris, and participated in his first collective exhibit at the Nouvelle Ecole du Montparnasse. On this occasion, he met Horacio Garcia Rossi, an Argentinian kinetic art painter, who then became his mentor. Soon after, Romain Bermond exhibited his work in several Parisian sites, in particular at the Gabrielle Laroche gallery and the Guigon gallery, and he participated in numerous art events in France and abroad (SLICK, Nuit blanche…). Alongside his work in theater as a set designer, scenographer, or musician, he developed an interest in percussion and Afro-Cuban music, and thus began to study with great names such as Miguel Gomez, Anga Diaz, and Orlando Poleo. He thereby joined several different groups, Cuban music orchestras, and brass bands.

It was in a brass band that Romain Bermond and Jean-Baptiste Maillet met. Together, they designed their first show in 2008, Stereoptik, which was a huge success with their audiences and with curators. This was the beginning of the STEREOPTIK company, which, since 2011, has crossed the globe with four shows and an exhibit in its repertoire. Their most recent show, Dark Circus, premiered at the Festival d’Avignon in 2015 and has since been performed on many international stages (London International Mime Festival, Wiener Festwochen, Zürcher Theater Spektakel, Festival Romaeuropa, Hong Kong Arts Festival…). This show has toured far and wide in prestigious settings. With support from the French Ministry for Culture and the Centre-Val de Loire region, STEREOPTIK is now a partner of the Théâtre de la Ville de Paris and the Hectare, a state-funded theater in Vendôme.